Bond Yields Break Out… Is This The End For the Everything Bubble?

Bond Yields Break Out… Is This The End For the Everything Bubble?

The ugly reality of inflation has begun to raise its head.
As we have noted previously, inflation is WELL above the Fed’s so-called target of 2%. Indeed, two of the Fed’s own in-house measures of inflation (the NY Fed UIG and Atlanta Fed Sticky Inflation measures) are clocking in at 3.14% and 2.5%, respectively.
That, in of itself, is a REAL problem for the debt-based financial system. Since 2008, the US has added over $9 trillion in public debt along with another $3 trillion in corporate debt, and $1.2 trillion in consumer debt.
ALL OF THIS was based on the assumption that interest rates would stay low.
So much for that. The yield on the 10-Year US Treasury has now spiked to 3%, breaking a 10-year downtrend.
Put simply, for a world that is TOTALLY saturated in debt like the US today, that blue box in the chart below is a MAJOR problem. 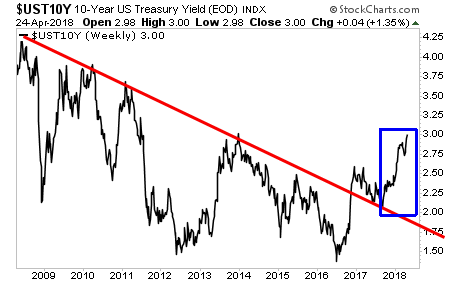 Stocks finally woke up to this reality in February. The results haven’t been pretty so far. 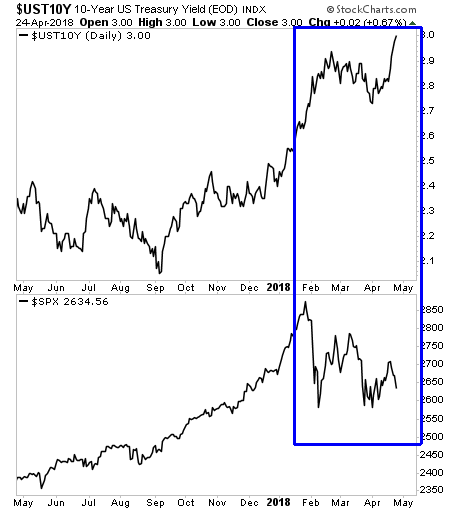 This is the single biggest trend for 2018: INFLATION. And it could very well burst the Everything Bubble.