Vancouver, British Columbia--(Newsfile Corp. - April 12, 2019) - Miramont Resources Corp. (CSE: MONT) (OTCQB: MRRMF) (FSE: 6MR) ("Miramont" or the "Company") is pleased toannounce it has received final assays from its 3,679-meter diamond drill program at its Cerro Hermoso polymetallic project located in southern Peru. Results include 249 m of 0.68 gpt Au equivalentincluding 1.95 m of 28.4 gpt Au equivalent in hole CH-009 (please refer to a table of results below and a nearby plan map showing the location of drill holes).

First pass drilling has confirmed the presence of a large mineralized system at Cerro Hermoso. Mineralization within the Central Breccia Zone appears open to the northeast, east and southeast as well as at depth. A nearby magnetic anomaly suggests the system is driven by a buried intrusion. Over the coming weeks we plan to compile, review and interpret all data from the latest program

The table below presents anomalous intercepts in all nine diamond drill holes completed at Cerro Hermoso. Some intercepts from holes CH-001 through CH-006 were previously reported in a news release dated March 28, 2019.

The technical content of this news release has been reviewed and approved by Dr. Quinton Hennigh, P.Geo., Chairman of Miramont and a Qualified Person as defined by National Instrument 43-101.

Miramont is a Canadian based exploration company with a focus on acquiring and developing mineral prospects within world-class belts of South America. Miramont's two key projects are Cerro Hermoso and Lukkacha, both located in southern Peru. Cerro Hermoso is a diatreme-hosted copper dominant polymetallic prospect. Lukkacha is a classic copper-porphyry prospect.

On behalf of the Board of Directors,
MIRAMONT RESOURCES CORP. 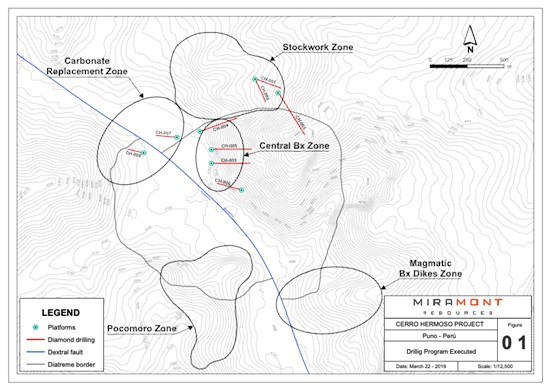