Vancouver, British Columbia--(Newsfile Corp. - February 24, 2021) - Ely Gold Royalties Inc. (TSXV: ELY) (OTCQB: ELYGF) ("Ely Gold" or the "Company is pleased to announce that through its wholly-owned subsidiary, Nevada Select Royalty Inc (collectively "Ely Gold"), it has entered into an Option Agreement with Crestview Exploration for its Cimarron Property, located in Nye County Nevada. Crestview will have the option to purchase 100% of the Cimarron Property ("Cimarron" or the "Property") with Ely Gold retaining a 2.5% Net Smelter Royalty ("NSR").

The Cimarron Property is a high-grade epithermal gold target associated with the historic San Antonio mine. The prospect is located in Nye County, Nevada approximately 30 kilometers North of Tonopah, NV (see Figure #1). The property is situated in the northern portion of the San Antonio Mountain Range. Regionally, the property is at the intersection of two prominent gold trends: The Walker-Lane trend which runs approximately NW and hosts a number of mines including Bullfrog, Goldfield, and Rawhide; and an approximately NNE trend of gold mines including Manhattan, Gold Hill, and Round Mountain. The property is comprised of 13 unpatented lode claims which overlap and control the six historically-producing claims around the San Antonio mine. The San Antonio mine was active from the early 1900's to the 1940's, and the mine area received attention again in the 1980's from a number of exploration companies including Newmont and Echo Bay. Altogether, approximately 190 holes and 54,000' were drilled in the 1980's, with gold intercepts greater than 1 opt encountered in several drill holes. Mineralization at Cimarron is hosted in a series of Oligocene age volcanic rocks overlying Paleozoic strata, and younger Miocene age intrusions. The target is a shallow, low sulfidation oxide gold system with strong structural control. The mineralization is associated with silicification, brecciation, and iron oxides.

The 2.5% NSR applies to the property and any locatable land in a 1-mile Area of Interest.

Stephen Kenwood, P. Geo, is a director of the Company and a Qualified Person as defined by NI 43-101. Mr. Kenwood has reviewed and approved the technical information in this press release.

Ely Gold Royalties Inc. is a Nevada focused gold royalty company. Its current portfolio includes royalties at Jerritt Canyon, Goldstrike and Marigold, three of Nevada's largest gold mines, as well as the Fenelon mine in Quebec, operated by Wallbridge Mining. The Company continues to actively seek opportunities to purchase producing or near-term producing royalties. Ely Gold also generates development royalties through property sales on projects that are located at or near producing mines. Management believes that due to the Company's ability to locate and purchase third-party royalties, its strategy of organically creating royalties and its gold focus, Ely Gold offers shareholders a favorable leverage to gold prices and low-cost access to long-term gold royalties in safe mining jurisdictions.

On Behalf of the Board of Directors
Signed "Trey Wasser"
Trey Wasser, President & CEO

FORWARD-LOOKING CAUTIONS: This press release contains certain "forward-looking statements" within the meaning of Canadian securities legislation, including, but not limited to, statements regarding completion of the Transaction. Forward-looking statements are statements that are not historical facts; they are generally, but not always, identified by the words "expects," "plans," "anticipates," "believes," "intends," "estimates," "projects," "aims," "potential," "goal," "objective," "prospective," and similar expressions, or that events or conditions "will," "would," "may," "can," "could" or "should" occur, or are those statements, which, by their nature, refer to future events. The Company cautions that forward-looking statements are based on the beliefs, estimates and opinions of the Company's management on the date the statements are made and they involve a number of risks and uncertainties. Consequently, there can be no assurances that such statements will prove to be accurate and actual results and future events could differ materially from those anticipated in such statements. Except to the extent required by applicable securities laws and the policies of the TSX Venture Exchange, the Company undertakes no obligation to update these forward-looking statements if management's beliefs, estimates or opinions, or other factors, should change. Factors that could cause future results to differ materially from those anticipated in these forward-looking statements include the Company's inability to control whether the buy-down right will ever be exercised, and whether the right of first refusal will ever be triggered, uncertainty as to whether any mining will occur on the property covered by the Probe Royalty such that the Company will receive any payment therefrom, and the general risks and uncertainties relating to the mineral exploration, development and production business. The reader is urged to refer to the Company's reports, publicly available through the Canadian Securities Administrators' System for Electronic Document Analysis and Retrieval (SEDAR) at www.sedar.com for a more complete discussion of such risk factors and their potential effect.

Neither the TSX Venture Exchange nor its Regulation Services Provider accepts responsibility for the adequacy or accuracy of this release. 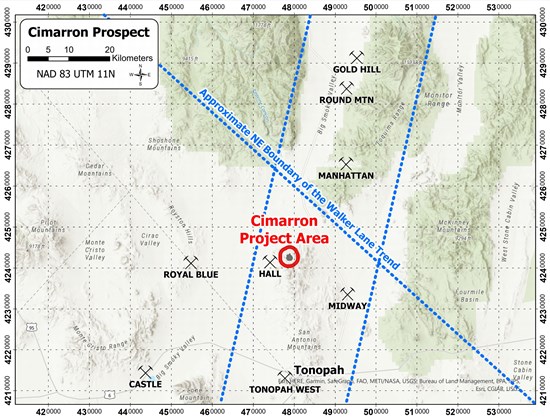 View all posts by: Todd Galczyk