After the close, Cronos Group (TSXV: CRON) (NASDAQ: CRON) filed a Form F-10 with the SEC, indicating that it is planning to sell shares in the United States in a deal of unspecified size that will be underwritten by GMP Securities, as lead underwriter, and BMO Nesbitt Burns Inc. The offering could represent the first time a Canadian cannabis producer has sold shares in the United States in a public offering. Cronos recently became the first Canadian LP to get listed on the NASDAQ.
While the size of the deal hasn’t yet been disclosed, the preliminary prospectus suggests that it will be at least $15 million, with $10 million supporting the company’s capital expenditures required to support its business in Australia and $5 million earmarked for Israel. The company has prepared the prospectus to conform to Canadian disclosure requirements, and it states that the offering price will be in Canadian dollars only but that shares will be offered in Canada, with the exception of Quebec, and the United States. The company currently has 161.6 million shares outstanding.
Shares of Cronos Group, which surged in late February on the NASDAQ listing, closed at C$10.30 in Canada and $8.00 in the United States, trading slightly lower in the after-hours trading in the U.S., with a last trade at $7.80 at the time of publication of this article. 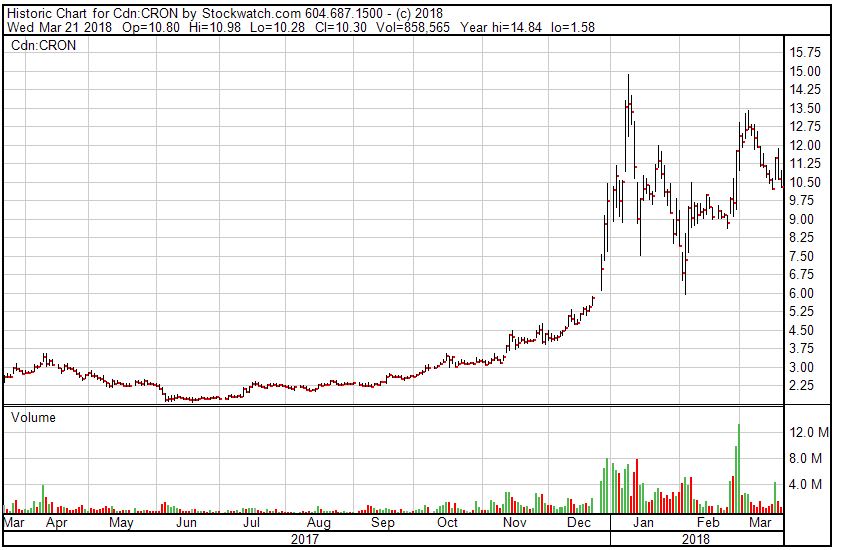 Note: As we were publishing, the company issued a press release indicating that the offering, a bought deal, is C$100 million. The deal is expected to close April 6th and consists of 10.42 million shares being sold at C$9.60, with an over-allotment option of 1.563mm shares that, if exercised, would boost the offering to C$115 million.

View all posts by: Karl Boyd